skip to main | skip to sidebar

I decided to post some "flashback" pictures this time...LOL
This is Glenn Yee Motorsports at Homestead, FL in 2004 for the Grand American Cup series race. This was our 1st time in Homestead, and with a new construction car too! OMG
The guys were all busy as soon as we unloaded the car! They were quickly finishing all the little things so we could go to tech before the racing weekend. 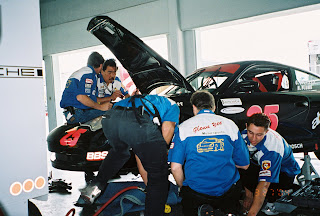 Glenn, Mike, Doug, Anthony, and Memo all worked up a sweat in a hurry...but made it go right and got us through tech and out on the track! 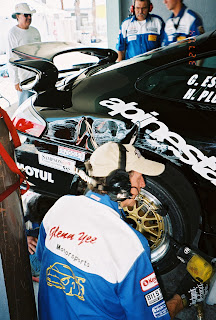 We had Hugh Plumb ( http://www.hughplumb.com/) driving with us, and on Saturday he set the unofficial track record during 2nd practice session, & broke the record he just set in the next session!! Then on Sunday, he had fastest time during 1st practice session! WTG Hugh!!
Our team owner had a small issue, and got caught up with turn 4 on the oval....he gave the car a big "owie"....some road rash, and a bent axle...UGH 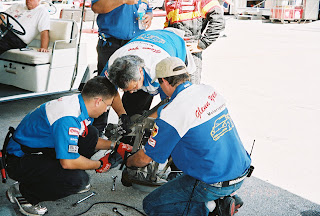 Our crew rallied, got all the replacement parts, and rebuilt the corner of the car. Those guys were AWESOME!
Once the car was up & running again, it was time to RACE!! 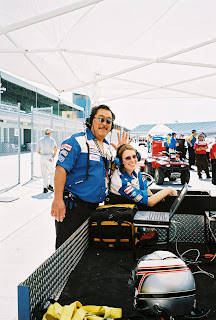 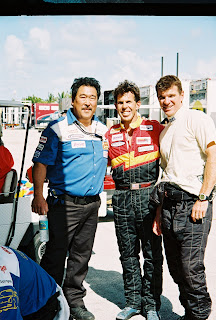 Craig Stanton (http://www.craigstanton.com/) stopped by our garage to say hi, and check in with Glenn & Hugh.

We always have a great time at the track...even with the drama of crashes, and brake issues!! What a great job...travelling around the country going RACING!

In September last year, we were hired to crew a KONI car at Miller Motorsports Park (http://www.millermotorsportspark.com/) in Utah. We had never had the chance to work at that track, so we were happy for the opportunity.

We had a drive up with our new trailer that was filled with drama! We lost 5th gear on our truck and had to limp in to make the first track day!! We managed to get the truck fixed while there - of course that was a whole bunch more drama - but nevertheless fixed in time for the trip home.

The track is HUGE! We were glad we had our pit cart - we would have never made it anywhere on time...LOL

Our crew is meshing well. All the new guys are working hard to catch up to the established crew guys, and all the personalities are working well together. A good sign is the smiles throughout the weekend and the guys joking with each other.

Our team owner and his co-driver had never driven at Miller, and both were hard at work all weekend learning the best way around all 4.5 miles of track. We didn't podium, but we did drive the car back to the paddock! Sometimes that is just as exciting!

Can't wait for the next opportunity to race there - what a fabulous facility.

We were lucky to be able to have 2 of our customer cars run in the 3 hour SCCA Enduro at Buttonwillow Raceway (http://www.buttonwillowraceway.com/).

The red 996 was driven by John Stott and Drew Staveley(www.myspace.com/63363597) . The blue 996 was driven by Nathan Swartzbaugh (http://www.nathanswartzbaugh.com/) and Craig Stanton (http://www.craigstanton.com/). Both of these are customer owned, and both customers were happy to see their cars on the track!

We had a fun time, and fortunately the weather was perfect! Nobody was overheating, and the cars ran great! Before the race started, they had Pit Cart Races! OMG..that was hysterical!! Everyone won that race...FUN for all... :)

We had a couple new crew members working with us, so during our down time, we did a little training and worked at bringing them up to speed. When race time came, everyone was ready...our crew supported the blue 996 and the red 996 was supported by John Stott's crew.


The race started with a Le Mans start, and Craig got to tag Craig to get the show going! We had some competition from an open wheel car, and we were super thrilled that both the cars made the podium!! Glenn Yee Motorsports prepped and maintained cars took 2 of 3 spots on the podium! The open wheel car took 1st, and John & Drew squeaked by us to take 2nd, and Nathan & Craig took 3rd!
WOO HOO

Promote Your Page Too

Glenn Yee Motorsports LLC
Glenn Yee Motorsports is committed into providing a corporate or private entity a motorsports solution that works. We provide development and execution of entire race programs, from preparation and logistics to management and driver development. Our philosophy of committing 110% to a program effort provides the foundation in achieving the results for you and your goals.

Developing a winning race program is no easy task, in fact it’s like racing itself, fraught with danger and excitement. We minimize the dangers by providing race car preparation solutions and processes that meet and exceed most sanctioning bodies requirements. Motorsports not only becomes an extension of the driver talent but a reputable symbol of a sponsor or corporate entity in spirit. We instill this excitement in the program to advance the marketing efforts of both sponsors and drivers and always understand that the spirit of the process and the commitment of its participants provides the results that are needed, a win-win situation.

Our involvement and experience in IMSA, Rolex Grand American, and SCCA, has brought us a vast base of knowledge and experience in suspension development. Our development over the last 30 years in Porsche race cars has yielded the most success, with both our current and future campaigns in SCCA and Grand-Am. We know how to make cars go fast…while impressing drivers with confidence to go even faster. From factory-built cars to ground up new construction race cars, we’ve proven that we can provide very fast and competitive cars that drive to record-breaking achievements.

The race car is but the tool by which the driver practices his craft. Development of the craft takes a vast amount of discipline and effort. We provide the environment, on and off the track, to maximize the potential of a driver. From team teaching and coaching by some of today’s finest driver’s to marketing and self promotion through multiple media, we can provide the basis and foundation of a growing and talented driving career.

Who's Checkin' Us Out?